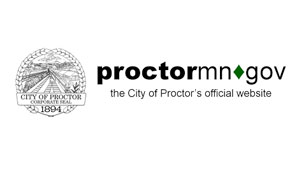 When it comes to history, few Minnesota cities have the rich heritage of Proctor. This city, surrounded by green hills, overflows with a charming ambiance.

Proctor was created in 1892 when the railroad was extending into Duluth and needed large flat areas. The flat plateau proved to be a convenient site as the mining industry reached here in the 1800's. This was due in large part to the development of the railroad and the construction of its iron ore sorting yards. It was the largest such yard in the world. Many see Proctor and its citizens as heroes who worked tirelessly, hauling and sorting the ore needed for steel for World War II and the Korean Conflict.

Green hills ring this village set city, providing a sense of comfort and charm. Originally called White City because of the large number of tents that newly arrived residents used as homes, Proctor was established in the 1800's as part of the development of the railroad, mining and steel industries, Proctor will most likely always be a major transportation center.

In 1894, the village was incorporated as Proctorknott after J. Proctor Knott, a U.S. Congressman from Kentucky who delivered a satirical speech ridiculing Duluth. The name was later shortened to Proctor.