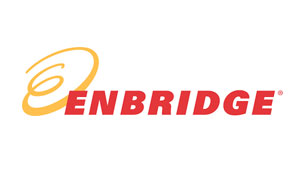 We transport energy, operating the world’s longest, most sophisticated crude oil and liquids transportation system. We have a significant and growing presence in the natural gas transmission and midstream businesses, onshore in Texas and Oklahoma and offshore in the Gulf of Mexico. We generate energy, expanding our interests in renewable and green energy technologies including wind and solar energy, geothermal and hybrid fuel cells. We distribute energy, owning and operating Canada’s largest natural gas distribution company, which provides distribution services in Ontario, Quebec, New Brunswick, Vermont and New York State.

The company employs approximately 10,000 people, primarily in Canada and the United States, and has been recognized as one of the Global 100 Most Sustainable Corporations in the world. Enbridge is included on the 2012/2013 Dow Jones Sustainability World Index and the Dow Jones Sustainability North America Index. Enbridge's common shares trade on the Toronto and New York stock exchanges under the symbol ENB. Enbridge has its regional headquarters is in Superior, Wisconsin.