Kashkari acknowledged one of the hardest tasks for a community is transitioning to a new economic identity. He encouraged attendees continue to expand and diversify in complementary industry sectors, while supporting traditional industries including mining, shipping, and manufacturing. 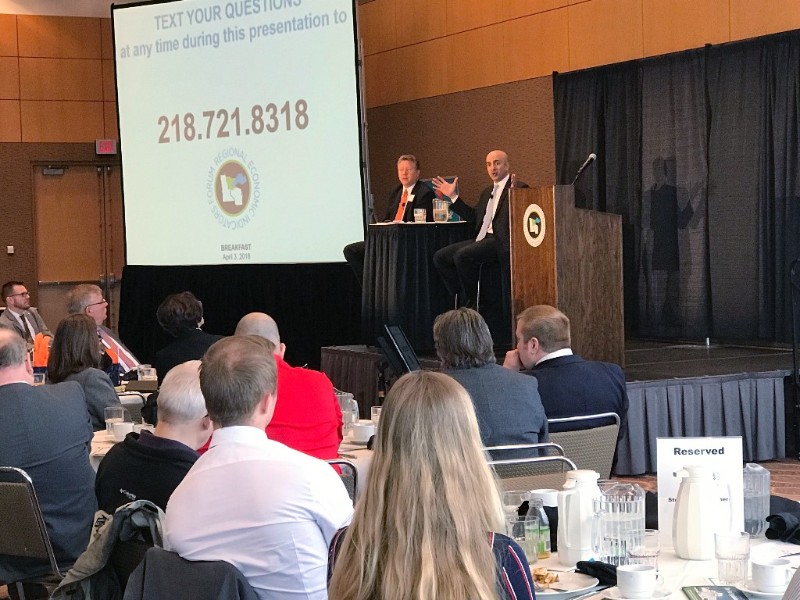 Kashkari’s keynote focused on labor market availability, wages, and workforce housing. With a decline in the unemployment rate from 10% to 4.1% since 2009, employers are faced with increased challenges in recruiting and retaining talent – resulting in increased pressure on wages and benefit packages. In addition, employers are also having to hire less-experienced people to fill skilled employment openings, which increases the burden of training on employers.

Kashkari fielded questions on the economy, monetary policy, tariffs, and other topics from the audience. He was generally optimistic about the region’s economy and highlighted the importance of workforce housing as a key asset in attracting talent to a community. Ensuring the community has an abundance of housing options is essential – including adequate affordable, market rate, and multi-family housing options.

Results from the continuous semi-annual economic research study were also presented at the forum. The study is gathered by economists and student researchers at the College of St. Scholastica, University of Minnesota-Duluth, and the University of Wisconsin-Superior. The findings indicate the labor force for the Duluth-Superior MSA (Metropolitan Statistical Area) has grown over the past two years, as has the overall economy. However, the region lags behind the overall growth rate of both Minnesota and Wisconsin. The MSA includes St. Louis, Carlton, and Douglas Counties.

APEX has served as a member of the REIF Steering Committee since its inception, and we were proud to help sponsor this Forum. Mark your calendars for the next REIF event on Wednesday, October 31, 2018, at the DECC.